The Gowanus Flushing Tunnel and Force Main: Just One Piece of the Puzzle

Things have been a bit busy around the FirstandCourt household over the last month, and there have been quite a few stories I just haven't had time to address.  Most will be lost to the ether, but this New York Times City Room piece on the Gowanus Canal Flushing Tunnel was too good to let slip by.  It's one of the best examples I've seen of informative journalism on the Canal and has some amazing photos from inside the flushing tunnel that I had never seen.  I've snagged one here as a fair use, but I encourage you to click through for the full article and pictures. 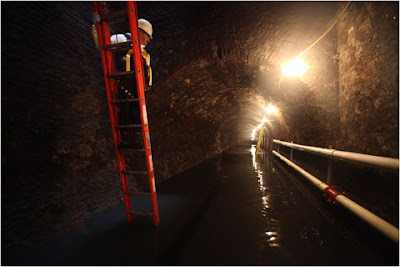 Repairs and improvements to the flushing tunnel are a long-planned and lengthy process that will ultimately improve water quality in the Gowanus Canal by improving the flow of water from the Buttermilk Channel (the flushing tunnel) and reducing sewer overflows by increasing pumping capacity to the inaptly named Red Hook Water Treatment Plant (in the Brooklyn Navy Yard - via the force main).  From the Times piece, here is a graphic that highlights DEP's planned changes to the flushing/pumping equipment at the head of the canal:
The article prompted me to go back and upload DEP's update on the Flushing Tunnel / Force Main project to Community Board 6's Environmental Protection Committee on October 25, 2010.  I've embedded the whole powerpoint deck below for convenient reading.

Gowanus Facilities Upgrade CB6 2010-10-25
Simply put - it's not enough.  The only tolerable outcome will be a complete end to combined sewer overflows not just in the Gowanus, but city wide.  These measures will help in the interim, but for the long haul our aging cities deserve Federal infrastructure spending to address what really is a regional and national issue.
Posted by Gary at 4:29 PM No comments:

The Naparstek Post: Better Fact-checking Than The New Yorker

Aaron Naparstek eviscerates an ill-informed New Yorker column.  Oh, and pity poor, poor John Cassidy, who drives a "heap" - a Jaguar XJ6.  Like his previous heaps, which included an E-class Mercedes and a couple of Cadillacs.  Clearly, just an average joe.

Cassidy makes himself out an ignorant, entitled buffoon in his piece (no link from me, you'll have to click through Aaron's piece to see it).  I expect more from the New Yorker than garbage like this.
Posted by Gary at 10:43 AM 2 comments:

The Brooklyn Greenway Initiative is one of my favorite local non-profits that is making a physical difference in our community.  The Greenway cleanups are a lot of fun - pitch in this Saturday! 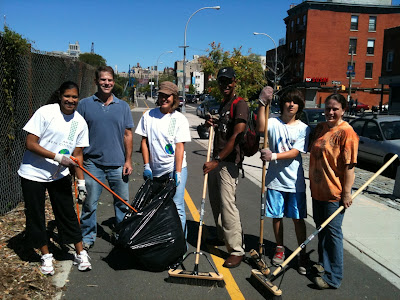 March 12
10:00AM
Please join Brooklyn Greenway Initiative and their friends at Columbia Waterfront Neighborhood Association for the first monthly clean-up of the year along the Columbia Street segment of the Brooklyn Waterfront Greenway. Tools and gloves provided, all ages welcome! Meet at Brooklyn Greenway Initiative’s office, 145 Columbia Street, on Saturday, March 12th. Clean-up runs 10:00AM-12:00PM.
To RSVP or for more info contact Brian at bmccormick@brooklyngreenway.org.
Posted by Gary at 7:43 PM No comments:

With a title like that, this post will probably disappoint:  I don't have the answer yet on when the 2nd Place entrance will be thrown open for the community.  The construction has seemed to last forever, but there is finally a light at the end of the tunnel.  And yesterday, an opening in the construction fence. 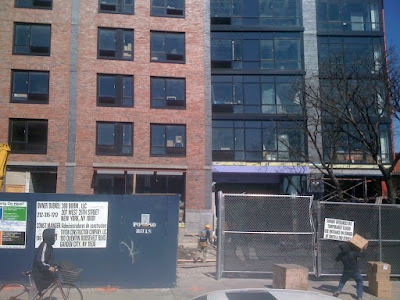 I took a closer look and snapped a couple shots of the once and future entranceway.  Note the steel beam above the entrance which presumably will support the entrance signage. 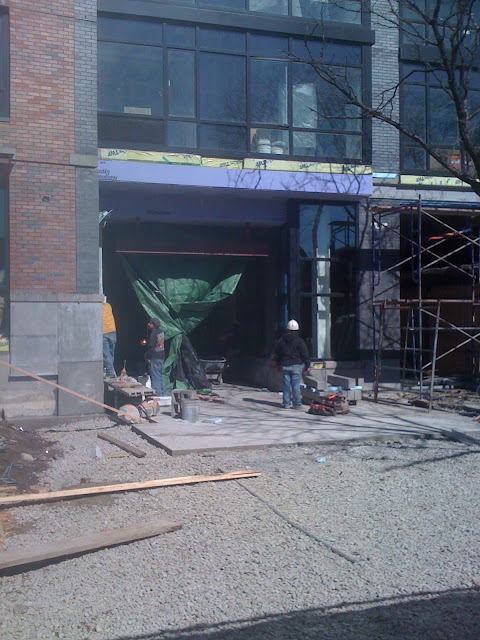 On closer inspection, it looks like the entranceway will be partly glass on the Smith Street side, providing a little extra visibility into the entryway when the commercial space is open. 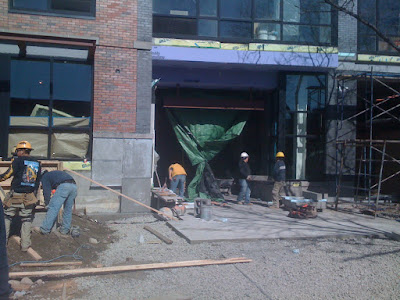 Finally, I took a longer shot from the stoop of the derelict property across the street. 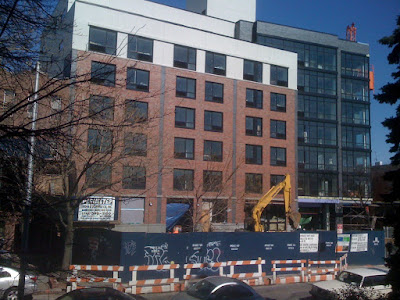 This was a hard-fought and amazingly long battle.  Despite the contextual re-zoning and a valiant effort by the community the developers were granted a variance by the Board of Standards and Appeals to build to the full extent of the old zoning law.  It's hard not to be bitter about an outcome that, in my opinion, was unsupported by the facts or the law.  But it's more productive (and healthier) to look on the bright side, since we can no longer change the outcome.  The mature trees on 2nd Place survived.  The original "Heavy Metal" Scarano facade was scrapped (graphic originally from Curbed). 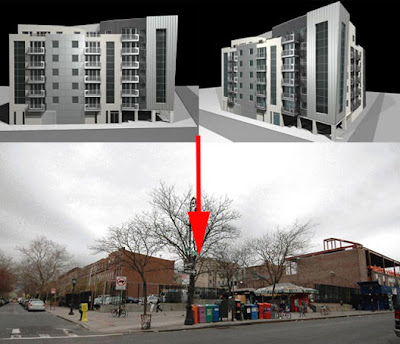 The Quadrini design certainly isn't perfect, but it's a measured improvement over that.

Lastly, the old gravel parking lot which encroached on a substantial portion of the block's courtyards and was, frankly, a blight on the corner, is gone.  The 24-hour residential presence over the subway entrance will improve security in the late night hours.  And it won't be long before the construction fences will be down, the subway entrance re-opened, and the next battle for neighborhood preservation is joined.
Posted by Gary at 5:41 PM No comments:

What's this I spy? 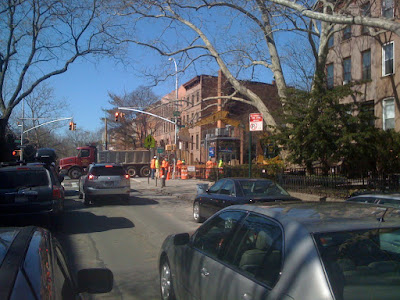 The major construction going on, which requires an enormous and deep trench the length of Court Street from 1st to 2nd Place, is due to the replacement of a sewer line. 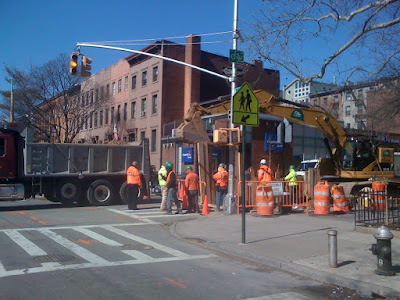 There is a good size crew moving this along at a fairly rapid pace. 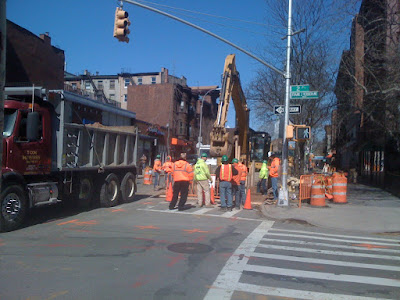 Here is a busted up old iron pipe that the crew pulled up in the excavation. 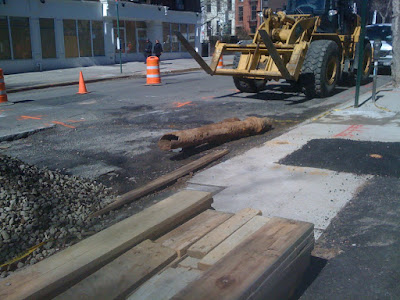 Also of interest - a crew is ripping up 4th Place from Smith to Court.  I asked the workers yesterday if this was related to the sewer project.  The answer was much more exciting: FiOS! 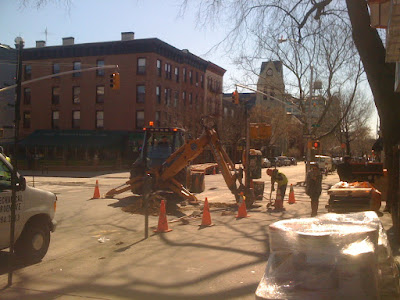 I don't want to get my hopes up too high but Verizon FiOS is long overdue in the area and Time Warner could seriously use the competition.  Bring on the high speed internet access!
Posted by Gary at 5:06 PM 2 comments:

1st Place was closed between Court and Smith Streets yesterday while ConEd crews cut a trench on the right side of the street.  1st Place block resident Barbara Brookhart shared some information on the utility work on the CGNA listserve:

Update on the aftermath of the gas leak in front of the CVS store on Court Street.   When the utilities were fixing the leak, they accidentally cut a water line, and Court Street had to be closed because the water was cascading down to Hamilton Avenue.

I haven't talked to anybody about this, so these are my observations while doing errands in the hood.  Can't help to think that everything seemed to have gone wrong with the repair of the gas leak.  But, thank goodness, we were lucky to not have had a San Bruno-type gas explosion, because you could smell the gas a block away.

Email ThisBlogThis!Share to TwitterShare to FacebookShare to Pinterest
Labels: 11231, CGNA

This morning I received a link through the TransAlt Brooklyn Google-Group to what really is the definitive PPW Bike Lane Benefits For Idiots guide.  Huge fonts, simple, clear analysis, and obvious conclusions.  It really is incredible that the NBBL-ers can continue to deny reality with a straight face.

So it was by way of that link that I found the Brooklyn Brainery, which I had not noticed before though it's right here in the neighborhood.  It looks like a pretty neat place, and I look forward to checking it out.

Brooklyn Brainery hosts cheap classes on anything and everything.

It's a place to experiment with all the things you've wanted to learn but just haven't gotten around to yet -- thinkbook clubs on steroids.

We're located in Carroll Gardens at 515 Court Street, a couple blocks from the lovely Gowanus Canal.

Their course catalog is HERE.
Posted by Gary at 2:13 PM 1 comment:

Not exactly in the Carroll Gardens footprint, but our good friends Steve and Sarah are opening up a great new space with yoga and integrated health services (acupuncture, herbs, massage therapy and psychotherapy) called Plaza Wellness.  The space is located just off Grand Army Plaza at 36 Plaza Street.

They're having an open house this weekend and free yoga classes - a great opportunity to check out a new local business run by terrific people.
Posted by Gary at 1:23 PM No comments: