An important meeting to attend. See you there.

- Presentation and introduction by representatives for the Department of Housing Presentation and Development of the development team selected by the City of New York to develop “Public Place,” the City-owned 6-acre parcel at the southeast corner of Smith & 5th Streets (Block 471, Lot1).

There's more on the agenda, but this is the main attraction.
Posted by Gary at 2:31 PM No comments: 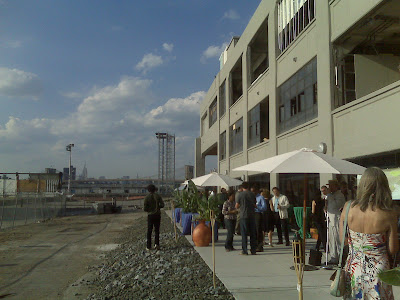 Last night was a gala fundraiser for the Brooklyn Greenway Initiative. They are making real progress on the Greenway, which has already beautified stretches of the Brooklyn waterfront.

More good things to come, with stretches by the Brooklyn Navy Yard and ultimately a wider berth along Columbia Street. The picture above includes an unbuilt stretch passing between One Brooklyn Bridge Park and the soon-to-be park itself, and was taken before many of the attendees had arrived.

We like what these guys are doing. Check out their website and pitch in if you can.
http://www.brooklyngreenway.org/
Posted by Gary at 2:25 PM No comments:

It's been so long, I almost forgot what leadership looked like. This is change we can believe in:

We can invest in rail, so that cities like Detroit, Chicago, Milwaukee and St. Louis are connected by high-speed trains, and folks have alternatives to air travel.

Barack Obama, via Matthew Yglesias via Streetsblog via my Blackberry.

Long time readers know that high speed intercity rail is one of my dreams for this country. If you've ever ridden the TGV in France, you know what we're missing. I hear the new AVE in Spain is even nicer.
Posted by Gary at 11:01 PM No comments:

The Four Borough Neighborhood Alliance held a rally on the steps of City Hall this afternoon demanding reform of the DOB. I was there, along with numerous elected officials, other council hopefuls and civic organizations.

Raul Rothblatt of Four Borough put together a powerful alliance to call for reform. I am reminded that it was just in April that John Hatheway, Vince Favorito and I went to the Assembly hearing on DOB's governance failings to provide testimony on stricter regulation. Sure lancaster was ousted, but to what effect? At the hearing, it was clear to all that the interim successor, LiMandri, was an apologist for the current regime and would not effect change.

Sure enough, LiMandri's DOB pulled back their crane inspections as soon as they thought no one was looking . . . just in time for another tragedy to occur. We need REAL change at DOB . . . there is talk of loosening requirements to let LiMandri become the permanent DOB Commissioner. This is exactly wrong: LiMandri must GO!

In better news, Brownstoner reports that the DOB has finally taken action against scofflaw architect and serial bad actor Robert Scarano. The entire City press release is posted at Brownstoner. Check it out.

Credit where due; more like this please.
Posted by Gary at 2:20 PM No comments: 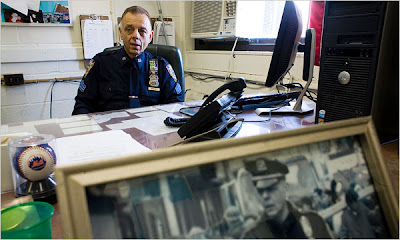 The New York Times has an excellent profile today on Sergeant Andrew McGoey of the 72nd Precinct.

In the New York Police Department, officers who reach the rank of sergeant typically retire after 20 to 25 years on the force. Sgt. Andrew P. McGoey waited longer to turn in his badge — a lot longer.

On Monday at police headquarters in Lower Manhattan, Sergeant McGoey will surrender Shield No. 801 after 39 years on the force. Of the city’s roughly 4,000 sergeants, none has held the rank longer than his 31 years.

Sgt. McGoey is retiring only because he can't stay any longer; the NYPD has a mandatory retirement age of 63. I've been impressed with the quiet strength and dignity of "Mr. McGoey" since I met him 10 or 12 years ago. His son is a good friend (and was one of my roommates at Rutgers College) who has always been proud of his dad's work. I can remember reading an article on Sgt. McGoey back then from US News and World Report that Jeff kept from the 80s.

Sergeant McGoey, your service will be missed in Brooklyn.

Photo from the New York Times.
Posted by Gary at 1:47 PM 1 comment: