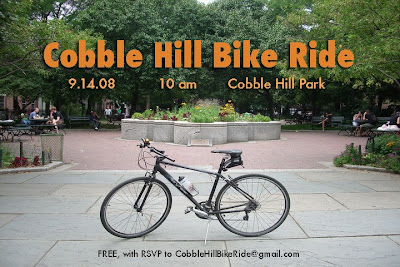 Lots of good news these days for pedestrians and cyclists in NYC. We had Summer Streets, which was a refreshing turnover of roads from cars to people walking, running, biking and skating.

The Cobble Hill Association and Brooklyn Greenway Initiative are hosting a 12 mile casual bike ride that will start at Cobble Hill Park and then pass through the Columbia Waterfront District, Red Hook, Park Slope, Prospect Park, Gowanus and loop back to Cobble Hill.

There will be several scenic rest stops as the ride follows mostly calm streets with some light vehicular traffic. Several Bike Marshals will travel alongside the group, guiding the ride. Bike Marshals will also be prepared to handle any urgent bike repairs needed. Light snacks and water will be provided but riders should be prepared with sunblock, plenty of water, and ready for a light pace that will include some cobblestone streets in Red Hook and the 9th Street hill in Park Slope, with an option to also ride hill within Prospect Park's car-free loop.

But does not allow much time for blogging.

- The Denver Police are taking a page from the Bloomberg/Ray Kelly playbook and planning in advance to harass and detain cyclists at the Democratic National Convention next week. Besides being wrong on many levels, it is just asinine.

- The Brooklyn Paper has an article on the Devin Cohen / Roger Adler civil court primary. This one is hugely important for progressives. Registered Democrats, please get out and vote for Devin Cohen on September 9th . . . it's a choice between one of the best, most altruistic community activists I've ever met (Devin) and a mercenary political hack (Adler). These primaries are typically low volume affairs . . . your vote counts!

When I get a chance to catch my breath, there's a lot of transit blogging to catch up on. We've got a real opportunity this year to revisit our transit funding schemes and fund the infrastructure investments that will keep New York on top . . . or we could make the same mistakes of the 70s.

Enjoy the unusually cool August weather . . . summer will be gone before you know it.
Posted by Gary at 9:51 AM No comments:

Still working 6 days a week. Hope you're enjoying your summer! Some items of note:

- Alternate side parking changes are in the works for Cobble Hill / Carroll Gardens beginning August 18th. See NYC DOT for details. More at the Gowanus Lounge.

- Assemblyman Joe Lentol sends an open letter to MTA regarding the neglected stepson of the NYC Transit, the G train. Brooklyn and Queens deserve better.
Posted by Gary at 3:08 PM No comments: