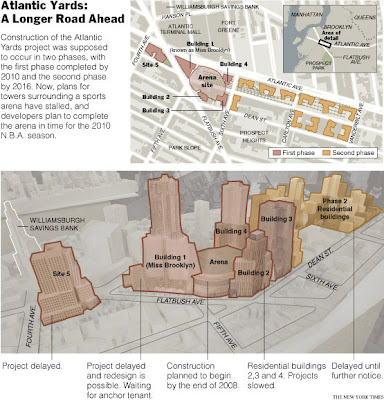 Yes, that's wither, not whither. It seems the project that Brooklyn loves to hate may be dying on the vine, so to speak. A tanking R/E market, sputtering credit markets, and Ratner's failure to secure an anchor tenant for Miss Brooklyn (she's no lady) have soured prospects for this mega-project.

This project from the start was a disaster in the making: a naked giveaway to a politically connected developer, a boondoggle of taxpayer financing for a sports arena, an egregious misuse of eminent domain, and a complete disregard for the community's input.

Make no mistake about it: The Vanderbilt Yards (there is no such thing as the "Atlantic Yards" outside of Bruce Ratner's drawing board) are an excellent site for development. So are the Hudson Yards. Deck them over and build. But this project was ill-conceived from the beginning.

The fig leaf of "affordable housing" (really, did you think that this project was ever about that? Or that we weren't just robbing Peter to pay Paul by raiding the state's funds for affordable housing to hand it all over to Ratner, at the expense of other sites around the city and state?) did very little to disguise the hideous, bloated carcass of Atlantic Yards.

Let's go back to the drawing board. We can do so much better than this. And don't dare build that goddamn arena as a stand-alone eyesore.

More from The Brooklyn Paper. And an unusually thoughtful Brownstoner thread.
Posted by Gary at 11:41 AM